had starting making a website for this a long while ago but the webhost had used at the time was really bad and had poor uptime, so have found this other one which has very good uptime,theres just one company advert on it  at the bottom of the page but its fine.

its early work in progress at the moment,but theres enough on it to release it.

it is a campaign to highlight the targeting and cyber bullying of learning and intelectualy disabled adults.
most people only think kids get cyber bullied but it is a regular problem for many vulnerable learning disabled people because we are less able to fight back or realise we are being bullied before we are in to deep.

all the main learning disability charities havent done any campaigns against it and when had looked for one to turn to when was being bullied there wasnt any sites,the only bullying that bullying charities think exists for adults is in the work place!

adult cyber bullies who are deliberately targeting and preying on vulnerable disabled people are showing clear signs of anti social personality disorder [pyschopathy & sociopathy] and it is about time we had learning disability charities looking into this.

we deserve as much right to use the internet as anyone else,people who abuse it by destroying other peoples freedoms shoud be tracked down and sent before the court,hopefuly ASBOd from using the internet to.
like there are courses for people who drink and drive,there shoud be courses for predatory cyber bullies and serious vicious trolls who have been refered by the courts.

if woud like to see a forum,please say so as well because will add one with enough interest.

and we are called the retarded ones?

most people am known by reading this are probably long aware of a person online who had spent years grooming,copying words of mine off here and forums to use as his own experiences for attention,lying,bullying and threatening to the point it triggered severe major depression and pyschosis which a doctor said she woud have had to section if was not living in residential care.
this guy had a permenent effect on the way that think,he had originaly done what was told by staff is called grooming of a vulnerable adult,he used information of mine to pretend we were so alike to make em like him and be friends which made manipulation easier for him.
he is still around the internet bullshitting on pretty much every forum he can for attention or trolling,he also still reads this blog; hi adrianna, rob,dawn ,matt,jake etc what ever name are prefering to go by now.

anyway,am on a website called yahoo answers and am mainly on the disability and special education boards,helping only the people with genuine disability questions whilst looking out for fellow regulars and trolling the trolls.

the person am speaking of above is on yahoo answers and he trolls the fuck out of it,with many multiple accounts to encourage attention giving and to vote himself up and report innocent individuals.
last week had been reported twice,on the same day by him and his band of merry sockpuppets [sockpuppet=multiple account persona].
acording to the emails had gottenn it resulted in both answers of mine been removed and having ten points per each removed answer taken away,what sort of self trolling nob goes to all the effort of trying to troll someone who doesnt recognise or understand numbers by getting points of theirs removed?
he also thinks posting questions about autistics being stains on humanity  is a way to rile em up,sorry it worked years ago but not any more,think it might be time to go get some DBT for that borderline and anti social personality disorder adrianne/rob/matt etc.

seeing as he is still a fan of the blog,heres a greeting of mine to him in british sign language which is one of the alternative communication forms am a user of and he pretended to communicate in when he faked having autism [actualy,it was ASL,american equivlent but many signs are the same though am only able to communicate with a few BSL most of mine is makaton]- 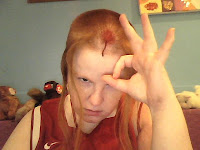 made this banner yesterday,had built the background of it totaly using brushes,one flare gradient and no filters,the fonts are a bit shite but didnt feel well enough to concentrate on browsing dafonts.com for to long.
the photo is a recent one of self and the special favourite chickens of mine-temple and tito that staff took,it has some filters used on it.

it is using the usual hacked gimp again,it is much better than photoshop unless are a profesional who needs access to a shit ton of useless filters,and am proud to say am not following the brainwashed digital art crowd by not illegaly downloading a product a lot of people have put a lot of work into.

had decided to make this weekend a time to make a new banner as am finding it not good everytime seeing the old one it reminds that poor lottie was ran over by some speeding bastard.

this one doesnt look right really but may have another go to morow or wait till back home.


built the background completely using brushes and not filters,not that itd work on linux anyway but no photoshop involved only a hacked GIMP [used with the GIMP painter and paint studio mods].
it does head in that loads of digital artists think digital art can only be created with photoshop,they download a program which the photoshop team work very hard on developing and have no problem with stealing it yet fucking whinge about kids stealing their art,bugger off.
Posted by Em at 10/27/2012 11:30:00 pm

went to a haloween party yesterday at the farm project and got to have a look at the grand opening of the holiday cabinet they have built there which is awesome and at some point am going to spend a day there which is a big goal of mine because a change of scnery is a major issue of mine.
have been going there for years though to visit lottie and the animals,and newer cat; princess.

it was a chance meeting but it turned out that the owner of the special olympics cheshire east club was there and she was glad to hear am getting involved in cheshire north and west club.

princess didnt want to know where mummy was because someone had fed her her dinner,so didnt get to give her a hug but picked up some chicken food and hay for the chickens and went to mc donalds on the way back for the first ever treat in a long while as am now getting the nappies on prescription/NHS and have some money to spend.

at home,we did the usual routine.
it was pitch black outside and the chickens had put themselves to bed,but we did what we do every night for them since it started getting colder-we make warm porridge for them with water,porridge,sultanas,sometimes dried meal worms if we have any,also soaked some malt loaf bread in water [they cant have dried bread cause it swells in their belly and is very dangerous] then broken up into tiny bits-it looked like lumpy diorreah in a bowl and one of the staff nearly puked when she saw it.

ex battery hen-henny [who is seven years old] has a secret love for slugs,meal worms [and porridge!].

some years ago had looked into joining the special olympics hoping to get into a special olympics club which offers equestrianism.
this was at a time long before had gotten the motability car and was limited to manchester as it is where used to live.
unfortunatelty there werre no clubs in manchester then let alone ones which offered equestrianism which is a big favourite of mine as anyone who am known by or who knows this blog will know. :P

had recently joined a subscription only website which is purely for people with learning/intelectual disability  [or the carers/support staff etc of] and so many users were going to their local SO club,it brought back the interest again so had found several in cheshire-one does horse riding and the other does loads of stuff but not horse riding.
the horse riding one is on holiday at the moment but theyre getting back in contact with manager,am going to be going with several other people from here to.
hope to do a lot of sports woud love to go to the other cheshire club as well will have to see if we can do that.